T-Ball and other adventures! 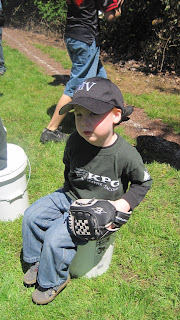 T-Ball season has come and gone!  I honestly think Owen really liked it.  I can see other seasons in his future.  He is still getting the hang of things.  But he usually spent every game with a big grin on his face.  Which put a big grin on my face.  He even got a trophy!  This is now his favorite thing to show everyone.  I really think Seamus is itching to play.  Next year, next year!

I am finally done with my Activities position with MOMS club.  I had the responsibility of planning every monthly calendar.  After two years,  it was time to pass the torch.  I have a feeling that my next year is going to be busy.

The big day is coming up!  Time for the Knight family to become a family of five.  My C-section has been scheduled for the morning of June 23rd.  Prayers are welcomed and appreciated.  I feel like we have so much yet to do!  Somehow all the loose end will be tied up! 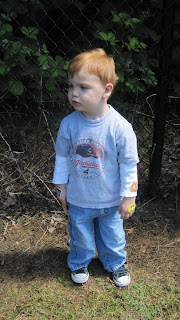 As if the Knight plate wasn't full enough, God to put something else on it.  Last Tuesday, Brandon went into the doctors to follow up on some reoccurring stomach issues.  The doctors decided that his gall bladder had to come out and two days later it did.  Poor guy.  He is recovering well, but I can tell he is in some pain.  He is such a good husband though.  I know he wants to help out more around the house but just can't.  I personally think he is helping out too much.  Right now, we have 2 slow people running after 2 very fast people.  But we are getting by.  Hopefully Brandon will feel a lot better now.
Posted by The Knight Family at 11:14 PM